The following sections describe the various configurations available to you on your SSR, the basics of the configuration workflow, and important things to consider when managing your SSR devices.

When a new node is initialized, it is given the factory default configuration. The factory defaults include the configuration attributes given to it during initialization (the router name and node name, and a high availability counterpart node if applicable) as well as various configuration elements that are part of the global data of an Authority – session-type elements that represent common network protocols (e.g., HTTP, HTTPS, SSH), and service-class elements for common DSCP values.

To restore an SSR system back to its factory defaults, use the restore config factory-default command from the PCLI.

Forcing the Generation of Configuration​

The Force Configuration Generation command (selected from the GUI or using create config autogenerated from the PCLI) generates and stages the configuration changes into the current candidate configuration. This allows you to validate, inspect, make edits, and commit these changes as part of the work flow.

Configuration concurrency was introduced in version 5.6. This feature creates a candidate configuration for each user the first time they edit their configuration, allowing multiple administrators to modify the running configuration at the same time.

Consider the case of User A and User B:

If the validation operation encouters conflicts, an error message containing the details of the conflict is displayed, and the conflicts are deleted from the candiate config. All non-conflicting changes are preserved in the candidate configuration.

In the example below, User B changed the description of the router Router, but User A had already deleted that router, resulting in the conflict.

To see the configuration changes that were preserved in the candidate despite the conflicts, run compare-config.

The following is an example of a configuration conflict as seen in the PCLI:

In this case, using compare-config displays a non-coflicting change that remains in the candidate, and can be committed.

The following conflict may occur when multiple GUI users make changes to the configuration.

Rather than an error message informing User B that the peer they are editing has been deleted, the GUI accepts the information directly impacting the change to the description field, but not the entire peer. The resulting commit failure message can be cryptic, as shown below. 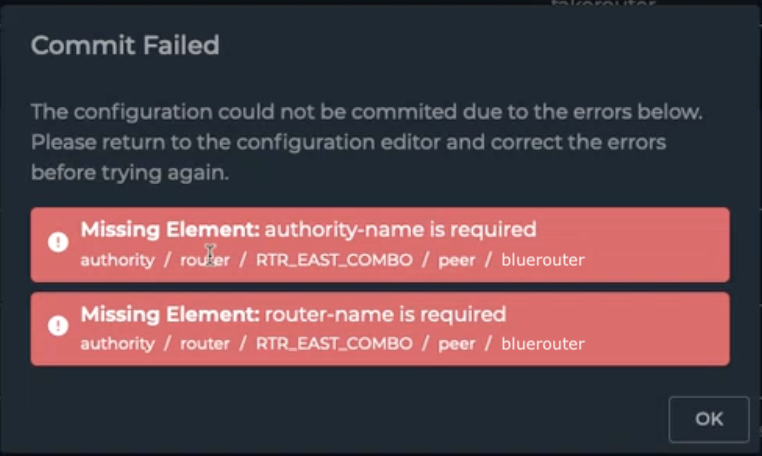 In this case, viewing the configuration changes as seen from the command line, the discrepancies are visible.

When User B commits their change, the peer, name, and description are verified to be added back into the configuration. The deleted authority-name and router-name are not found as part of the change, and therefore generate the commit failure message.

To resolve this type of conflict, the error message and candidate configuration should be reviewed with the adminstrator. They can work to identify the user who generated the conflicting changes and review the event logs to reconstruct the changes to the affected objects. Ultimately the users must determine the priority of the configuration changes and commit the result.

There are several things to be mindful of before configuring high availability:

Unlike many traditional routers, the Session Smart Networking Platform contains a series of interdependent pieces of configuration – referred to as our data model – to inform its decisions on routing, forwarding, and policy enforcement. These interdependencies mean that the method of working with the SSR may be slightly different than you are accustomed to.

This basic workflow (configure, validate, commit) is the fundamental mechanism for effecting change in the behavior of your SSR Networking Platform. Other operations you may be familiar with from other network devices, such as backup/restore, etc., have analogues in the SSR paradigm. These backup/restore operations may operate on the candidate configuration, the running configuration, or both.

The output of compare config candidate running is formatted such that it can be copied and pasted back into the PCLI, to revert all changes and have the candidate be "reset" to the running configuration. Obviously, you can selectively copy/paste sections of this output back into the PCLI to revert only specific sets of changes. However, care must be taken when doing this, as the configuration is organized in a hierarchy with specific expectations around exiting configuration blocks.

From the GUI, use the Revert to Running button in the navigation bar near the top of the window to accomplish the same goal.

When copying exported configurations onto a SSR platform, the file must be placed in /etc/128technology/config-exports